You can call it focus. You can call it concentration. You can call it obsessiveness. But what you have to call it is a triumph. And it really was a critical moment in this techie-centered world we now all live in. (The photo below is courtesy of Darren McCollester/Getty.) 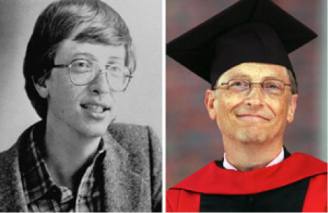 Walter Isaacson has a remarkable article on Bill Gates and the birth of the personal computer. The article, “Dawn of a Revolution”, is in the Harvard Gazette.

In it, he described the phenomenal ability of the young Bill Gates at Harvard to focus. The centerpiece of his article is the eight weeks that Bill Gates (with a little help from a couple of well-known friends, especially Paul Allen) invested in developing “the BASIC interpreter for inclusion on all Altair machines.” Eight weeks of completely ignoring everything except the task at hand. It had to be finished fast. And he got it done.

Here are the key excerpts:

Gates began to rock back and forth, as he often did during moments of intensity. When he finished the article, he realized that Allen was right. For the next eight weeks, the two of them embarked on a frenzy of code writing that would change the nature of the computer business.

Gates ignored the exam cramming he was supposed to be doing and even stopped playing poker. For eight weeks, he, Allen, and Davidoff holed up day and night at the Aiken lab making history. Occasionally they would break for dinner at Harvard House of Pizza or at Aku Aku, an ersatz Polynesian restaurant. In the wee hours of the morning, Gates would sometimes fall asleep at the terminal. “He’d be in the middle of a line of code when he’d gradually tilt forward until his nose touched the keyboard,” Allen said. “After dozing an hour or two, he’d open his eyes, squint at the screen, blink twice, and resume precisely where he’d left off — a prodigious feat of concentration.”

At night they would fan out the printouts onto the floor and search for ways to make it more elegant and compact. By late February 1975, after eight weeks of intense coding, they got it down, brilliantly, into 3.2K.

You know, I’m not sure I’ve ever spent that amount of time on any task with anything close to that kind of concentration. I’m feeling just a little intimidated…