I had the pleasure of going to an event where I got to meet Wintley Phipps, world-renowned vocal artist and education activist.

He told the audience a story of how he was finishing up a concert in Baltimore, Maryland and was on his way back to his hotel. Before he could make it to his car, a young lady stopped him on the street and wanted to talk to him.

Phipps described the woman as homely. He said there was nothing spectacular about her; but nevertheless, he took the time out to chat with her.

The lady explained how she was troubled at her job and had the feeling they were going to fire her. She said she was inspired by the words Phipps spoke and needed encouragement. Phipps was touched and provided the woman with some extra words of inspiration to keep the woman motivated, and the woman went on her way.

In a very candid manner, Phipps informed the audience that he probably never would have stopped for the woman in his bachelor days because of her appearance. He said his wife eventually taught him to be kind to every type of person without bias.

Anyways, back to the story. That woman who stopped Phipps at the concert did get back on her feet and made a great career for herself. You may have heard of her before—Oprah Winfrey.

Because Phipps provided Winfrey with the attention and encouragement she needed back then, she later contributed millions of dollars to his educational foundation. It’s something that never would have happened if Phipps turned his nose up at the “homely” looking lady. 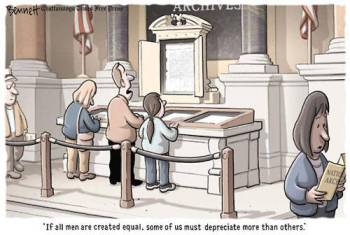 That story got me thinking. It’s almost cliché now to tell someone to treat others equally, but somehow that advice gets twisted when it’s being applied to leaders in organizations.

How many times in your organization have you given precedence to a certain stakeholder just because of his/her occupation, family background, financial status, etc.? Or how about doing something for someone else only because you’re expecting something in return? (I’ve seen it more times than I’d like to admit…)

The true measure of character is how you treat and relate to those who can do nothing for you. Keep this in mind with every interaction you are part of.

Because at the end of the day, with all the politics and cronyism aside, all you have is yourself to look at—and you might not like what you see.

Besides, you never know who the “homely” person whom you ignored might turn out to be!