Lessons Learned from “The Dress”

This dress shut-down my social media accounts for two days. I just could not take any more comments about the dress. Blue and black?  White and Gold? Or, if you’re an oddity, like me, you see brown and light blue. Seriously, how could a simple picture of a dress go viral? Maybe, the better question is why are different people seeing different colors? 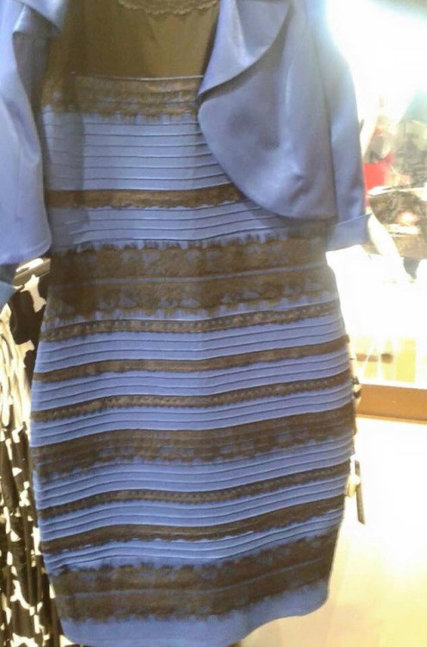 According to the New York Times, the dress was worn by a mother of the bride during a wedding in Scotland. Obvious in person as blue and black, a photograph that the mother sent to her daughter a week before the wedding received a different response as to the colors with everyone that viewed it. Still intrigued by the color differences after the wedding, a member of the wedding band then posted the picture to her Tumblr account and asked for feedback on the colors of the dress. Within hours, the photograph of the dress and polls were viral. Millions upon millions of people commented on the viral phenomenon, which has been nicknamed “Dressgate.”  Everyone saw a different combination of colors.

Scientists have differing opinions on exactly why there are different color combinations seen. The answer likely lies in how our eyes process visual information and discounts color. Our brain uses the primary colors to determine a dominant response for the visual color that we view, in conjunction with other factors such as material, light, and the sensor in the camera (since the color discrepancy only appears in the photograph). In this case, there is not a clear dominant response for the color, which is then interpreted differently by different individuals.

Oddly enough, this social media phenomenon reminded me of an important lesson that I learned in graduate school from one of the top public administration professors (way before social media existed!). In class, John Nalbandian walked us through a case study for a community where an apartment building consisting primarily of senior citizens requested a crosswalk so they could safely cross the street to reach a Dairy Queen and a church. In a brief summary, the staff told the appointed/elected officials that a crosswalk was not warranted in that area. The residents were upset with the recommendation and after further discussion, it was realized that the request was not really about safety for crossing the street as much as it was about dignity and mobility.

During my studies, I was taught that in local government, “2 + 2 does not always equal 4.” In the case of the crosswalk, the staff looked at traffic counts and believed that a crosswalk would impede traffic flow when it seemed very safe for those to cross this street safely.  When looking at the exact same issue, the senior citizens saw a change to improve their mobility and in turn maintain their dignity.

When determining local government policy, there are times when there is not a clear, dominate response and the same issue can be seen differently by different people.  It is the responsibility of our leaders to realize that 2 + 2 may not always equal 4 – it is our responsibility to help process the information to determine the best option for our community.