Muriel Call joined SGR in December 2014 as a Research Assistant and is currently the Research Coordinator. Before joining SGR, Muriel was on the Library Staff for the City of Southlake, Texas. She has 15 years of experience working in the library and information science field in academic, public, and special libraries. She earned a BA in English and a Master’s degree in Library and Information Science, both from Louisiana State University.

Ron Holifield is Founder/CEO of Strategic Government Resources (SGR). He founded SGR to specialize in facilitating collaboration among local governments, with a particular emphasis in employee training and development of next generation leaders. Since its inception in 1999, SGR is now the largest private sector training company in the nation.
Ron previously served as City Manager of Garland, DeSoto, Farmersville, and Sundown in Texas. He was Assistant City Manager in Plano and on the City Manager’s staff in Lubbock. 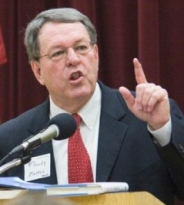 Randy Mayeux is a professional speaker and writer. He gives more than 450 public presentations annually to various business and government audiences, non-profit groups and associations, and professional conferences. He is the Founder and a former Vice-President of Creative Communication Network, a full-service communication company offering speeches and presentations, training and custom consulting and meeting facilitation for individuals, groups and organizations.

Mike Mowery is the Chief Operations Officer for SGR. He has a passion for seeing leaders of organizations grow and excel. He enjoys spending time with leaders from all sectors of society in order to observe the mechanics of good leadership at work. Prior to joining SGR, Mike served as a pastor for churches in Colorado and Texas for over 20 years. He earned his Doctor of Ministry degree from Golden Gate Seminary, which focused primarily on leading organizations to make long-range plans.

The @cityoffate is seeking a Public Engagement Coordinator. This position is responsible for the planning, drafting and disseminating of comprehensive public information regarding City initiatives, programs and policies, promoting effective media relations, managing City social media, and marketing campaigns pertaining to programs sponsored by the City of Fate. A bachelor's degree in Marketing, Public Relations, Journalism, English or a related field and at least 3 years of related experience in community engagement, marketing, or journalism is required. Public sector experience preferred.
The City of Blaine, WA seeks applicants with technical knowledge, academic training, management expertise, and dedication to public service to be the next City Manager. This position requires a bachelor’s degree from an accredited college or university in public administration, business administration, or a related field with a master’s degree in business management or public administration preferred. Candidates should also have at least five years of management experience in local government, budgeting, fiscal management, and supervision.
SGR is seeking candidates with extensive knowledge of website management, analytics, design, and SEO best practices and standards, and who are excited about becoming contributing members of our exceptional team for our new Webmaster. The chosen candidate will be highly collaborative and a self-starter who possesses exceptional multitasking, organizational, and communication skills and excellent attention to detail.
The @cityoflacey seeks a seasoned, strategic, and experienced Human Resources executive with a bachelor’s degree in human resources, public or business administration, political science, communications, or related field to be the next Human Resources Director. A minimum of eight years of progressively responsible human resources experience, including three years at the supervisory or management level, is required for this position.
The Town of Trophy Club is seeking a skilled and strategy-minded municipal finance leader with excellent communication skills to be the next Finance Director. This position requires a bachelor’s degree in finance, business, or a related field with a master’s degree preferred. Candidates should also have five to seven years of experience in municipal finance administration, and status as a Certified Public Accountant.
@historicmontgomerytexas seeks applicants with a bachelor’s degree in public administration, business administration, finance, or a related field to be the next City Administrator. Five years of progressively responsible experience in public administration, including three in city management, is required for this position.