We are all familiar with the character Ebenezer Scrooge, from Charles Dickens’ famous novella, A Christmas Carol. This character is depicted, as a surly, cold-hearted businessman who hates Christmas, spends his life hoarding his wealth and forces his employees to work long, grueling hours for little pay. Scrooge is basically everyone’s worst nightmare when it comes to a manager. However, as we learn more about

Scrooge through his journey with the ghosts of Christmas past, we find that he actually is a victim of circumstance. His childhood experiences, misfortune in love, and depression overcome him, not allowing him to re-frame his perspective to understand how he, as a manager, needs to communicate with his employees.

In communications, this is called understanding your frame of reference, or how individuals assess information. This can be based upon an individuals education, background, personal values, experiences, cultural differences and more, having a large influence on how information flows from or to us. The greater the overlap in frame of reference between two people, or the greater the similarities in individual’s backgrounds, the higher the likelihood that communication will be successful.

In the case of Scrooge, due to his lack of willingness to open up to his employees and allow them to understand his background, employees as well as others, simply assume that he is crotchety and cold-hearted. Therefore, any message that he sends to an intended audience will misconstrued, and may be dismissed due to the disrespect that the intended receiver may have for the sender. However, if the intended receiver of the message understands Scrooge’s background, they may be more willing to understand his situation and receive the message without the attachment of bias.

So, what can be done to fix these communication issues?

In order to fix this communication barrier, managers must do a bit of re-framing. Meaning that as leaders, we must seek to look at things in a different way and seek to understand the other person’s frame of reference. The following can assist with this process:

What are some of techniques or methods that you use to help improve communication?

Generations with a Twist – Part Three

Catch up on part one and two of the Generations with a Twist blog series before reading the final part here.

Along with major events, the developments in technology have impacted us enormously. The influences technological advancements

have had on our lives have been huge. Each generation has had a vastly different experience because of the developments in technology that have occurred at certain ages. Technology, perhaps foremost, has impacted the way we communicate so significantly. The way people of each generation communicate has one of the greatest impacts in the workplace. We constantly hear grumblings from Silents, Boomers, and even X-ers towards Millennials and the Homeland Generation because of their ability to “communicate appropriately”. Where older generations will prefer to physically speak to another person, Millennials and the Homeland Generation will send a text, or send an email, or some sort of electronic messaging. It is faster, more efficient and less invasive than demanding someone’s attention at that very moment. The way Millennials and the Homeland Generation communicate has developed from what we were taught in school when we were growing up. We were taught to use technology, and it is what is socially acceptable among our peers. Using technology to communicate is something we have learned, just as much as the way the Silent and G.I. Generations learned to communicate by writing hand written letters and having meetings. What we have to remember, particularly in the workplace, is that each generation has its own way of communicating. Neither is necessarily better than the other. There is a time and a place for verbal, in person communication, and there is a time and a place for electronic communication. We need to teach each other the skill of communication. One thing is for sure about Boomers, X-ers, and Millennials – we are all learners. We all love to learn. But, we are also great teachers.

The importance of strong communication and empathy in the workplace really cannot be understated. We are now living in a time where we have up to four generations in the workplace. Understanding and appreciating how each person functions and communicates can greatly reduce frustration and lead to a much more understanding and successful environment. Understanding this about communication is more important for those in leadership positions, perhaps more than ever before. Having empathy, as a leader, is so vital in today’s work environment. Ask yourself, when you were twenty-something, were you an expert communicator, or an expert in your field? I am one of these twenty-somethings in the workplace that we are speaking of, and I confess, I still have a LOT to learn… and I’ll thank you for being patient and remembering this fact. For all the Millennials out there, when your parents and grandparents ask you how to use a computer, I always keep in mind that these are the people taught you how to use a spoon…

We all have differences and we all have similarities, but one thing that we know for sure – we were all twenty-somethings at one point, and the older generation felt we were all frustrating, immature and lacking basic life skills… this is not something that is new, or particular to a specific generation. A wise woman once said about the generation that succeeded hers –

“Annoying? Yes. Dangerous? No. They were simply our youthful doppelgangers who need our compassion more than anything.” – Carrie Bradshaw from Sex and the City.

Generations with a Twist – Part One 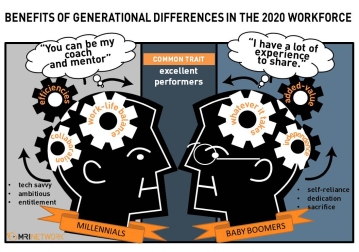 Before we begin, I want to add in a little disclaimer. When we talk about generations, we are talking in extreme generalizations. We are going to focus on the overall so-called “trends” of generations. So, please do not freak out or look for the exits if one of the trends that we discuss for your generation does not reflect you.

We have all had moments where we felt that younger generations are borderline sociopath. Common, admit it. The older and thus more mature generations in the workforce will always see the younger employees as immature and inexperienced. But, what do you expect? Of course those twenty-somethings are not going to have 10 years of experience, or any significant exposure to the workplace. We cannot expect the twenty somethings of the workforce to be expert communicators, or to have a strong sense of emotional intelligence, because these are skills that are learned over time.

Let’s take a look at some of the things that have been said about generations:

Now, I know what you are all thinking. Surely these must pertain to the Millennial and the Homeland Generation! Believe it or not, none of these quotes were written about the Millennials. In fact, quote number four was what Generation X said about the Boomers. Quote number five is actually from Socrates back in Ancient Greece. Let that sink in for a moment… does it really sound all that different from what we are currently saying about the most recent generations? We are all the same. What it ultimately comes down to is the stage of life we are all in and the priorities that are common to each age group. We often forget that we were there once. It’s easy to look at the younger generation and think, “what were you thinking?” “Why are you wearing that?” But remember, you were this person once!

Check the 16% on Tuesday for part two of this three-part series!