When you Lose your Credibility

(re. ethos): “Virtue, then, is of two sorts, virtue of thought [e.g., wisdom, comprehension, intelligence] and virtue of character [e.g., generosity, temperance, courage, justice]. Virtue of thought arises and grows mostly from teaching, and hence needs experience and time. Virtue of character [i.e., of ethos] results from habit [ethos]; hence its name ‘ethical’, slightly varied from ‘ethos’. Hence it is also clear that none of the virtues of character arises in us naturally.”
Aristotle

If then the light within you is darkness, how great is that darkness!
Matthew 6:23

It’s ancient wisdom. If the task is to communicate, then the one communicating needs to be believable. It is pretty much a requirement in the persuasion arena. This “believability” is connected to “ethos,” referring to the “character of the speaker; credibility” Aristotle included it as one of his three primary means of persuasion (along with logos, and pathos). 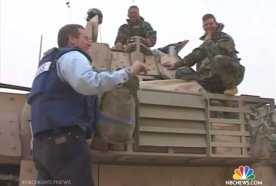 The current Brian Williams saga is a pretty clear example of what happens when a person who is perceived to be credible — (credible = competent, honest, trustworthy) – loses such credibility.

Quite a case can be made that we almost “naturally/automatically” live and speak and act in ways that make people lose their trust in us. To quote the good Doctor House, “Everybody lies.”

I just read a review of a new book The Devil Wins on Slate: You Lie! A tricky new book on the history and philosophy of deceit by Katy Waldman. The article, and apparently the book (I’ve downloaded the sample pages, but haven’t yet read them) make the case that House was right – “everybody lies.” From the book/article:

A study indicates that the average person composes three deceits for every 10 minutes of conversation—“and even more when we use email and text messaging.”

It seems that one of our tasks is to aim to do so less and less.

So, back to Brian Williams. His problem is obvious – journalists are expected to be truthful and trustworthy. It’s part of their “job description.” One task of a good journalist is to find out when others are not being honest. If the journalist is dishonest himself/herself, it is a long slog back to credibility.

Yes, it is possible to regain that credibility – to earn it back. For example, Nina Totenberg was famously fired for plagiarism early in her career. Her later reflection is a classic: “I have a strong feeling that a young reporter is entitled to one mistake and to have the holy bejeezus scared out of her to never do it again.” (Read about this here).

But, thinking of Brian Williams, at this moment we are all our own Diogenes. From the article:

Diogenes the Cynic, lamp in hand under dazzling sunshine, patrolled the agora for evidence of one honest man. He found a bunch of guys who said they fit the bill, which is how he knew they didn’t.

This week, NBC’s Nightly News anchor Brian Williams was suspended without pay for six months for misrepresenting a military incident that occurred when he was reporting overseas. He reported, and confirmed in other venues on multiple occasions, that he was part of a convoy of military helicopters forced to land in the desert of Iraq in 2003. He elaborated in detail that the helicopter in which he had been a passenger was hit by enemy fire and was forced down. Veterans from the incident challenged his recollections and Mr. Williams recanted the story earlier this week. He then voluntarily took a leave of absence for a few days prior to the decision from NBC regarding his suspension.

In a memo to her staff explaining the suspension, NBC News President Deborah Turness wrote, “As Managing Editor and Anchor of Nightly News, Brian has a responsibility to be truthful and to uphold the high standards of the news division at all times.”

Whether or not you believe the suspension was with merit or that his actions constituted misconduct, the bottom line is that he has lost the trust of those whom he serves.

His journalistic career currently spans thirty-four years, twenty-two of which are with NBC. It is hard to believe that his entire career and professional reputation could be subject to a misrepresentation in a single story (though told a number of times). However, that is all it takes to lose your integrity.

Since my entire knowledge of how a news room operates is derived from watching the HBO television series Newsroom, I am not going to predict whether Brian Williams will return as anchor of Nightly News after his suspension is completed. However, I do know that leaders of governmental organizations and news rooms have something in common – if you lose the trust of those you serve, you cannot be an effective leader (Tweet This).

While the concept of losing the trust of your organization and/or you community seems like something that could never happen, it can happen with one mistake, small or large.  Each day, you need to ensure that as the leader of the organization you are being clear and truthful – the whole truth – in your communication. Trust takes good connections upon good connections to build, but only one bad connection to erode all of the good.

Continue to build the trust of those you serve – one good, honest connection at a time (Tweet This).